Kaela arrived on Thursday so now we have four of the children with us. She left Seattle just before they closed the airport because of snow and ice. I don't mean to rub it in Seattle, but it's sunny and 84 degrees here.
We started clearing the property last week. Here's the machine doing the work. It's exciting to move forward with our plans. 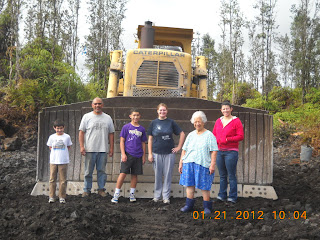 We have an access road in and then a section 150 X 200 feet cleared. It's starting to look like something you could actually set a house on! 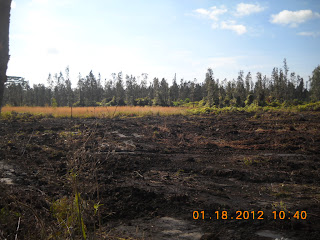 You can see the ohia trees in the background (click to enlarge the photo). Here's the story of how they came to be.
A long time ago, there was a handsome chief named Ohi'a. He was in love with a beautiful maiden, Lehua. Ohi'a and Lehua had promised to be true to each other always.
One day, Pele, the goddess of volcanoes, saw Ohi'a and wanted him for herself. Pele was know for her angry tantrums and jealousy. When she got angry, she would call forth burning lava to destroy everything around her.
Pele appeared to Ohi'a as a lovely woman. "I am the goddess, Pele," she said, "and I want you for my husband."
When Ohi'a heard her, he was afraid. Ohi'a knew if he refused to marry Pele, she might get angry, but if she was just testing his love for Lehua and he said yes, she'd still be angry. Either way Pele could destroy his land and kill his people. Ohi'a didn't know what to do.
"Before I answer, will you promise not to use your volcanic power no matter what I answer?"
"Yes, I promise," answered Pele. She didn't tell Ohi'a that she had many other powers that she could use.
"Then, I cannot marry you," Ohi'a said, "for I have already given my heart to Lehua and have promised to be true to her. Besides, I am a mortal and not worthy of marrying a goddess."
Pele was furious. "How dare you defy me!" she cried. She cast a spell and turned Ohia into a twisted tree with gray leaves.
When Lehua saw what Pele had done to Ohi'a, she begged the goddess to change him back, but Pele refused.
Lehua sat at the base of the tree that was Ohi'a and cried. When the other gods heard poor Lehua, they took pity on her. They each tried to change Ohi'a back, but Pele's magic was too powerful. At last, they came up with a plan that would unite the lovers forever. The gods cast a spell that changed Lehua into a beautiful red flower on the Ohi'a tree. Ohi'a and Lehua were together at last, and Pele could never separate them. 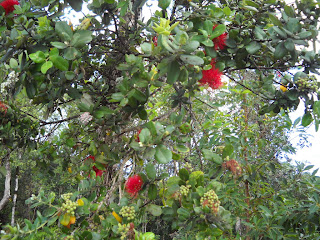